Iâ€™ve looked for explanations why there are geographic pockets of behavior or thinking.Â  Iâ€™ve looked for reasons to explain why some attributes, conditions, traits, behaviors, qualities and characteristics seem to cluster in certain areas,Â while residents of other places tend towards the opposite.

Why do certain states reliably vote in predictable patterns?Â  Why is the South especially prone to violent crime?Â  Iâ€™ve performed regression analyses and searched for correlations between certain variables such as income, education, climate, occupations, geography, housing, recreation, cost of living and crime.

It seems like it should be fairly simple to predict what conditions have an effect on crime rates.Â  For example, our recent brutal recession should have crime rates climbing, due to unemployment, unstable family structure, unaffordable housing, and decreased funding for police services.Â  But as the FBI notes, â€œthe estimated number of violent crimes in 2011 declined for the fifth consecutive year. Property crimes also decreased, marking the ninth
straight year that the collective estimates for these offenses declined.â€

I havenâ€™t found any pattern or rationale that explains much of the variation to my satisfaction, and all the explanations Iâ€™ve seen promoted, such as the â€œbroken windowâ€ theory and the â€œRoe v. Wadeâ€ angle, have come up short.Â  As the New York Times noted, a prolonged 20-year decrease in crime has the experts baffled.

â€œThe historian David Hackett Fischer traces the divide back to the British settlers of colonial America. The North was largely settled by English farmers, the inland South by Scots-Irish herders. Anthropologists have long noted that societies that herd livestock in rugged terrain tend to develop a â€œculture of honor.â€ Since their wealth has feet and can be stolen in an eye blink, they are forced to deter 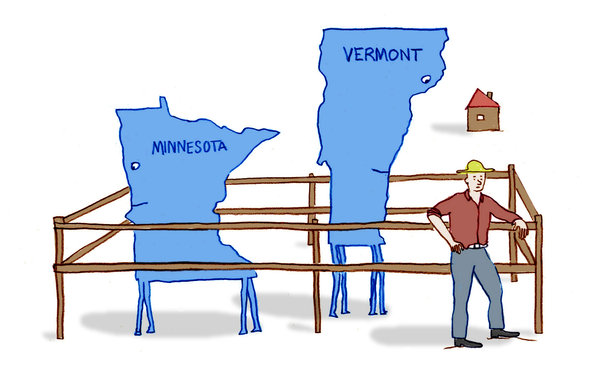 rustlers by cultivating a hair-trigger for violent retaliation against any trespass or insult that probes their resolve. Farmers can afford to be less belligerent because it is harder to steal their
land out from under them, particularly in territories within the reach of law enforcement. As the settlers moved westward, they took their respective cultures with them. The psychologist Richard Nisbett has shown that Southerners
today continue to manifest a culture of honor which legitimizes violent retaliation. It can be seen in their laws (like capital punishment and a stand-your-ground right to self-defense), in their customs (like paddling children in schools and volunteering for military service), even in their physiological reactions to trivial insults.â€

And Pinker sums up his piece with â€¦

â€œThe North and coasts are extensions of Europe and continued the government-driven civilizing process that had been gathering momentum since the Middle Ages. The South and West preserved the culture of honor that emerged
in the anarchic territories of the growing country, tempered by their own civilizing forces of churches, families and temperance.â€

I could see that some may argue that this is nonsense, that we can move wherever we choose and we are not compelled to live in certain areas.Â  Yes they say, certain culture and peoples settled different areas but now we have jetliners, cars and an information society that enables to us to travel and work anywhere we choose.

But onÂ the other hand, we are may be able to choose to live where we want, and we want to be surrounded by people who think and act like we do.Â  We donâ€™t want to spend our lives trying to adapt to people with different values and customs.Â  So our new freedom to move about and relocate is not making our country more diverse and homogenous, itâ€™s actually creating more clusters of like-minded people.Â  These islands of like-mindedness are denser and more sharply defined than in previous generations.

When it comes to new theories, if they pass the first tests of credibility and soundness, I like to put them on the proverbial â€œback burnerâ€.Â  When certain situations arise, Iâ€™ll take them for a test drive and see how they stand up against new evidence.Â  Based on the results, the new theories will get promoted or demoted before they are put back on the shelf, until the next time they are dusted off and reexamined.

This line of reasoning isÂ definitely outside my usual sphere of research, but Iâ€™ll be following up on it in the future.